TORONTO, ON / ACCESSWIRE / January 28, 2021 / Anaconda Mining Inc. (“Anaconda” or the “Company”) (TSX:ANX)(OTCQX:ANXGF) is pleased to announce results from the initial stages of an ongoing 10,000 metre exploration drilling program (the “Drill Program”) at its Tilt Cove Gold Project (“Tilt Cove”), located within the Baie Verte Mining District in Newfoundland, approximately 45 kilometres by road from the Company’s Pine Cove Mill and long-term tailings facility.

Results have been received for ten (10) holes totaling 1,641 metres from the Scarp Zone targeting surface mineralization and associated geophysical anomalies over approximately one kilometre of strike length (Exhibit A). Drilling consistently encountered strongly altered and mineralized rocks that represent the volcanogenic massive sulphide alteration system (“VMS System”) believed to be part of the same geological system that hosts the nearby, past producing Tilt Cove Mine, which mined 8.16 million tonnes of copper ore at grades ranging between 1.25 and 12.0% copper as well as producing 42,425 ounces of gold. The Tilt Cove Mine was active from 1864 to 1917 and again in 1957 to 1967. The extensive VMS System is locally gold-enriched, consistently hosts disseminated, stringer and semi-massive pyrite, chalcopyrite and sphalerite, including an intersection of semi-massive chalcopyrite in hole SZ-20-04.

Highlights of the drilling include intersections of both gold and copper including:

“Initial drill testing of the Scarp Zone has outlined a kilometre long strike extent of a VMS System including high-grade copper mineralization and elevated levels of gold, proximal to the past-producing Tilt Cove Mine. The results highlight the prospectivity of the area for base metals through the discovery of high-grade copper mineralization in this previously untested area. Our focus remains on the discovery of a high-grade gold deposit similar to the past producing Nugget Pond Mine, but we are pleased with the discovery of base metal mineralization in addition to precious metals, demonstrating the strong potential of the area. Further drilling is anticipated in this area in 2021, targeting other gold prospects both along strike and associated with the VMS alteration system. We continue to execute on the ongoing 10,000 metre Tilt Cove drill program, with drilling completed at West Pond and with two drills currently turning at the Betts Cove and Growler prospects. Results of the drilling will be released upon receipt and evaluation of related assays.”

The Scarp Zone is characterized by more than a kilometre of exposed Nugget Pond Horizon coincident with a similar strike length consisting of 107 gold bearing samples over 0.5 g/t gold. The area is also characterized by a strong deformation zone adjacent to the Nugget Pond Horizon which dips shallowly northwest beneath younger Silurian rocks. As part of a larger, ongoing 10,000 metre Drill Program at Tilt Cove, the Scarp Zone was tested with 1,641 metres in 10 holes (SZ-20-01 to 10) over a 1.0 kilometre strike extent, following up on surface gold mineralization indicated by coincident rock grab and float samples as well as IP chargeability anomalies.

All samples and the resultant composites referred to in this release were collected using QA/QC protocols including the regular insertion of certified standards and blanks within each sample batch sent for analysis and completion of check assays of select samples. Diamond drill core samples were analyzed for Au at Eastern Analytical Ltd. in Springdale, NL (“Eastern”), using standard fire assay (30 g) pre-concentration and Atomic Absorption finish methods. Copper values were determined by Inductively Coupled Plasma (ICP) analysis along with 33 other elements at Eastern. Eastern is a fully accredited firm within the meaning of NI 43-101 for provision of this service.

Note: “rock grab and float samples” are selected samples and are not necessarily representative of mineralization that may be hosted on the property.

Anaconda is a TSX and OTCQX-listed gold mining, development, and exploration company, focused in Atlantic Canada. The company operates mining and milling operations in the prolific Baie Verte Mining District of Newfoundland which includes the fully-permitted Pine Cove Mill, tailings facility and deep-water port, as well as ~15,000 hectares of highly prospective mineral lands including those adjacent to the past producing, high-grade Nugget Pond Mine at its Tilt Cove Gold Project. Anaconda is also developing the Goldboro Gold Project in Nova Scotia, a high-grade resource and the subject of an on-going Feasibility Study. 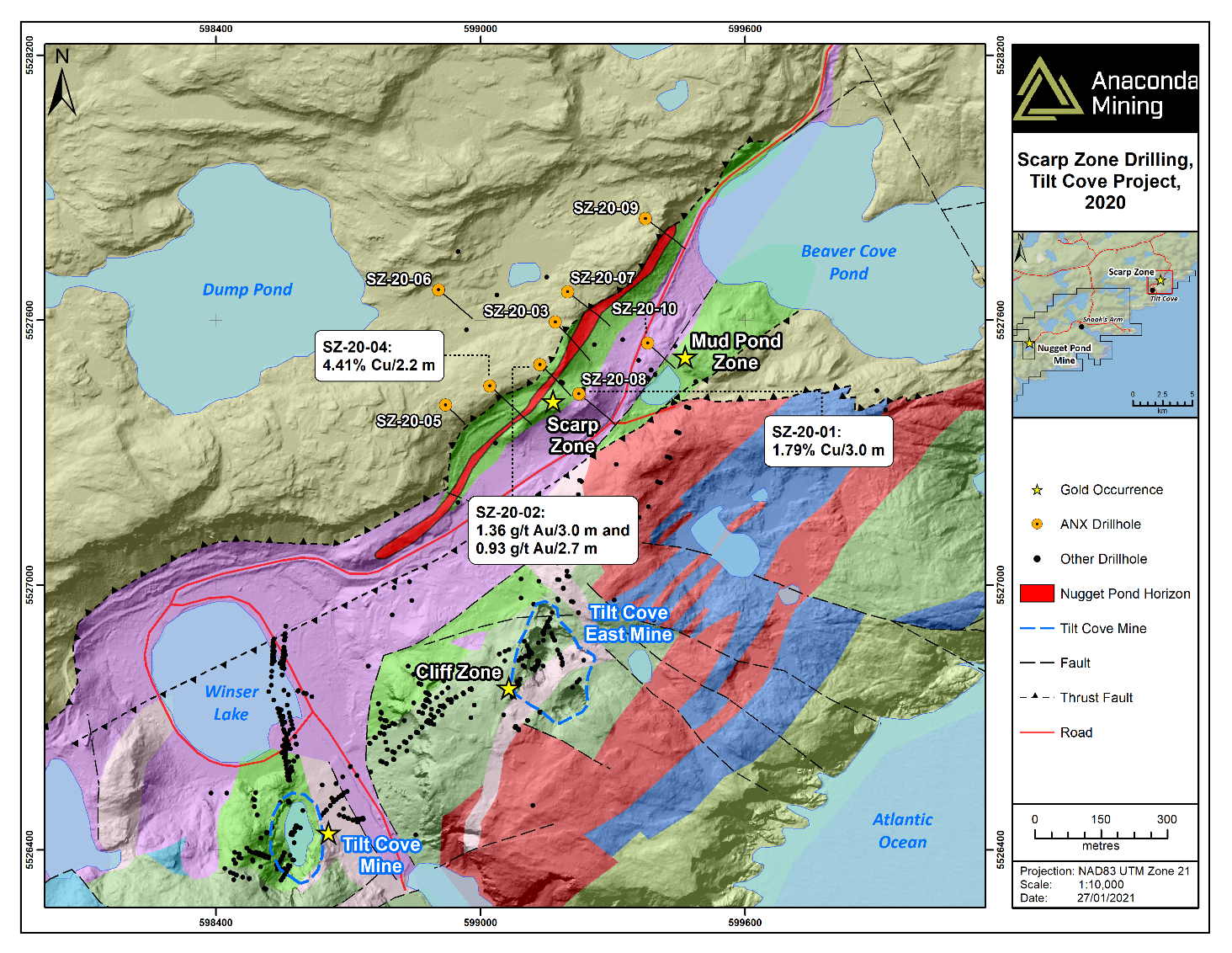 Exhibit A. A map showing the Scarp zone characterized by more than a kilometer of anomalous gold samples greater than 0.5 g/t gold, within a VMS system, as well as the location of drill holes referenced in this press release.