TORONTO, ON / ACCESSWIRE / January 6, 2021 / Anaconda Mining Inc. (“Anaconda” or the “Company”) (TSX:ANX)(OTCQX:ANXGF) is pleased to announce that it has initiated a 1,000 metre diamond drill program (“Drill Program”) at the past producing Lower Seal Harbour Property (“Lower Seal Harbour”), located 1.6 kilometres southeast of the Company’s 100%-owned Goldboro Gold Project in Guysborough County, Nova Scotia (“Goldboro”) (Exhibit A). As previously announced in July 2019, the Company has entered into an option agreement to acquire a 100% interest in Lower Seal Harbour.

The Drill Program is focused on testing known gold mineralization hosted on the north limb of an anticlinal structure that is parallel to a similar anticline that hosts the Goldboro Deposit, located approximately 3 kilometres to the north (Exhibit A). The Program will include the twinning of two historic drill holes to confirm high-grade intersections and to sample adjacent wall rock for low-grade mineralization, and testing whether the anticlinal structure immediately south of historical mining activity contains gold mineralization at shallow levels, particularly within the center of the anticline. The Company also plans to drill test two geophysical IP chargeability anomalies that have not been previously tested.

Highlights of the Lower Seal Harbour Property include:

“ Our focus at Lower Seal Harbour is the discovery of further gold mineralization based on our experience at Goldboro, which is now the single largest gold deposit in Nova Scotia. The current, early-stage work at Lower Seal Harbour is focused on determining the number of geological environments that host gold including previously untested wall rock adjacent to past workings; drill testing the hinge of the anticline, which in the Goldboro Deposit represents one of the key mineralized environments; and drilling previously untested geophysical anomalies that have strong resemblances to anomalies at Goldboro. Should the Lower Seal Harbour Property host another gold deposit, there is the potential to further expand the larger Goldboro Gold Project in the future.“

Geology and History of Past Production
The Lower Seal Harbour Mine produced 34,295 ounces of gold, after mining 394,905 tonnes intermittently between 1904 and 1949. Gold is hosted in both the quartz veins and anticlinal host greywacke and argillite of the Goldenville Formation, with accessory arsenopyrite, pyrite and galena. Previously recognized mineralization is hosted solely on the limb of the fold with no past exploration undertaken in the hinge of the fold, which represents one of the key mineralized environments in the Goldboro Deposit. Thirty-nine (39) broad-spaced historical drill holes, totaling 9,506.9 metres have tested the Property to date.

* All quoted drill core sample intervals, grades and production statistics have been compiled from historic assessment reports obtained from the Government of Nova Scotia. Representative drill core from drilling in the 1981, stored in Nova Scotia government facilities, have been inspected by Anaconda geologists for Lower Seal Harbour, though no mineralized core remained. The observed core was considered representative of the host rocks as described in terms of rock type and alteration. A 1988 assessment report related to drilling programs for Lower Seal Harbour were completed by Scotia Prime Resources Inc. with metallic screen fire assay analysis completed by Bondar-Clegg and Company Ltd. of Ottawa, Ontario. No QAQC procedures were noted in the Scotia Prime report.

Readers are cautioned that data quoted in this press release predates the 43-101 instrument and it was not possible for Anaconda representatives to resample historic mineralized intervals. Sufficient work has not been completed by a Qualified Person to verify and validate the specific assay results of historical work.

Widths from drill core intervals reported in this press release are presented as core lengths only. True widths are unknown. 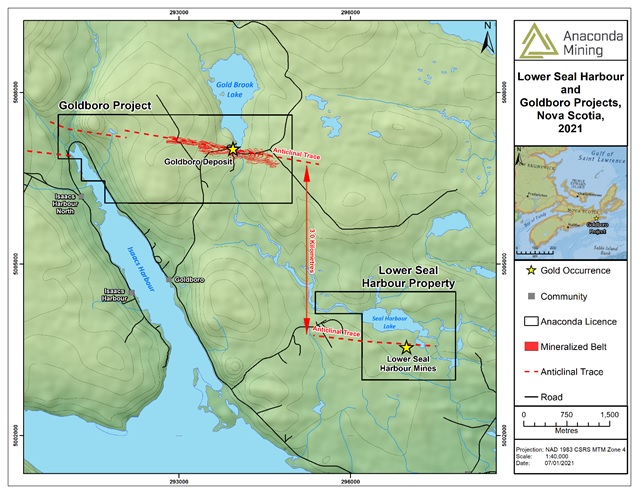 Exhibit A. A map showing the location of the Lower Seal Harbour Property near the Goldboro Gold Project Deposit as well as the trace of the anticlinal structures that host gold mineralization.