TORONTO, ON / ACCESSWIRE / January 7, 2021 / Anaconda Mining Inc. (“Anaconda” or the “Company”) (TSX:ANX)(OTCQX:ANXGF) is pleased to announce it has expanded and further consolidated the Tilt Cove Gold Project (“Tilt Cove”) located within the Baie Verte Mining District in Newfoundland, approximately 45 kilometres by quality roads from the Company’s Pine Cove Mill and long-term tailings facility (Exhibit A). The expansion includes an additional 4,175 hectares of prospective mineral property, acquired via staking and an option agreement, that covers an additional 14 kilometres of favourable geology and structure in the region. The Company now maintains a 100% interest over 35 kilometres of highly prospective strike length including the Nugget Pond Horizon that hosted the Nugget Pond Mine.

Highlights of the expanded area of the Tilt Cove Project include:

“We are excited to have completed such a significant expansion of the Tilt Cove Gold Project, which provides the Company with an additional 14 kilometres of continued strike length, in a highly-prospective mineral property, encompassing the same geological trend as the past producing, high-grade, Nugget Pond Mine which had an average recovered grade of 9.85 grams per tonne gold. The Tilt Cove Gold Project now includes a 35-kilometre strike extent of this highly prospective geological terrane, in addition to being adjacent to the Green Bay Fault, a crustal scale structure proximal and genetically linked to both the Nugget Pond and Hammerdown Mines. We continue to aggressively execute our exploration programs at Tilt Cove, including an initial ongoing 10,000 metre program, and we are well-funded to advance exploration work on our expanded land package and follow-up on any potential discovery.”

The ongoing 10,000 metre drill program continues to focus on several high-priority targets with drilling expected to continue into the winter. We are aggressively executing on our exploration and growth plans, having drilled 3,569 metres at the Scarp Zone and West Pond Targets, with plans to initiate drilling at the Betts Cove, Growler, West Pond and East Pond targets early in the first quarter of 2021. The results of drilling at the Scarp Zone and West Pond will be communicated once all assays have been received.

Expansion of the Tilt Cove Project

Anaconda has expanded the Tilt Cove Project, acquiring an additional 14 kilometres of strike extent of the Betts Cove Complex, host to the past producing, high-grade, Nugget Pond Gold Mine as well as the Tilt Cove and Betts Cove Copper Mines. The expanded area is road accessible, underlain by the Betts Cove Ophiolite, as found throughout Tilt Cove, and 17 significant gold and copper occurrences with 190 of 1,416 rock grab and float samples grading between 0.5 and 152.6 g/t gold, including 79 of 1,416 rock grab and float samples grading between 5.0 and 152.6 g/t gold. These occurrences have only been historically tested, primarily for base metals, by cursory diamond drilling comprising 1,701.1 metres in 16 drill holes between 1965 and 1997. None of the drilling completed in 1965 (7 holes; 1,023 metres) was tested for gold mineralization and many of the other subsequent holes stopped short of the targeted mineralization. Compilation and review of historic data will be completed during early 2021 in advance of a summer exploration program.

The expansion of the Tilt Cove Project was primarily achieved by staking of 2,375 hectares of mineral lands in a single licence. The Company also entered into an option agreement with local prospectors for the right to acquire a 100% undivided interest in a further 1,800 hectares in 13 licences. The option agreement provides for total cash payments of $145,000 and further share or cash payments (at the Company’s election) of $85,000, both over a four-year term, as well as a 2% NSR, capped at $5 million. All amounts are in Canadian dollars.

*Historical grab and float rock samples are compiled from historic reports and data filed with the Department of Natural Resources, Newfoundland and Labrador. Sufficient work has not been completed by Anaconda geologists and QPs to verify the validity of these individual assays.

** “rock grab and float samples” are selected samples and are not necessarily representative of mineralization that may be hosted on the property. 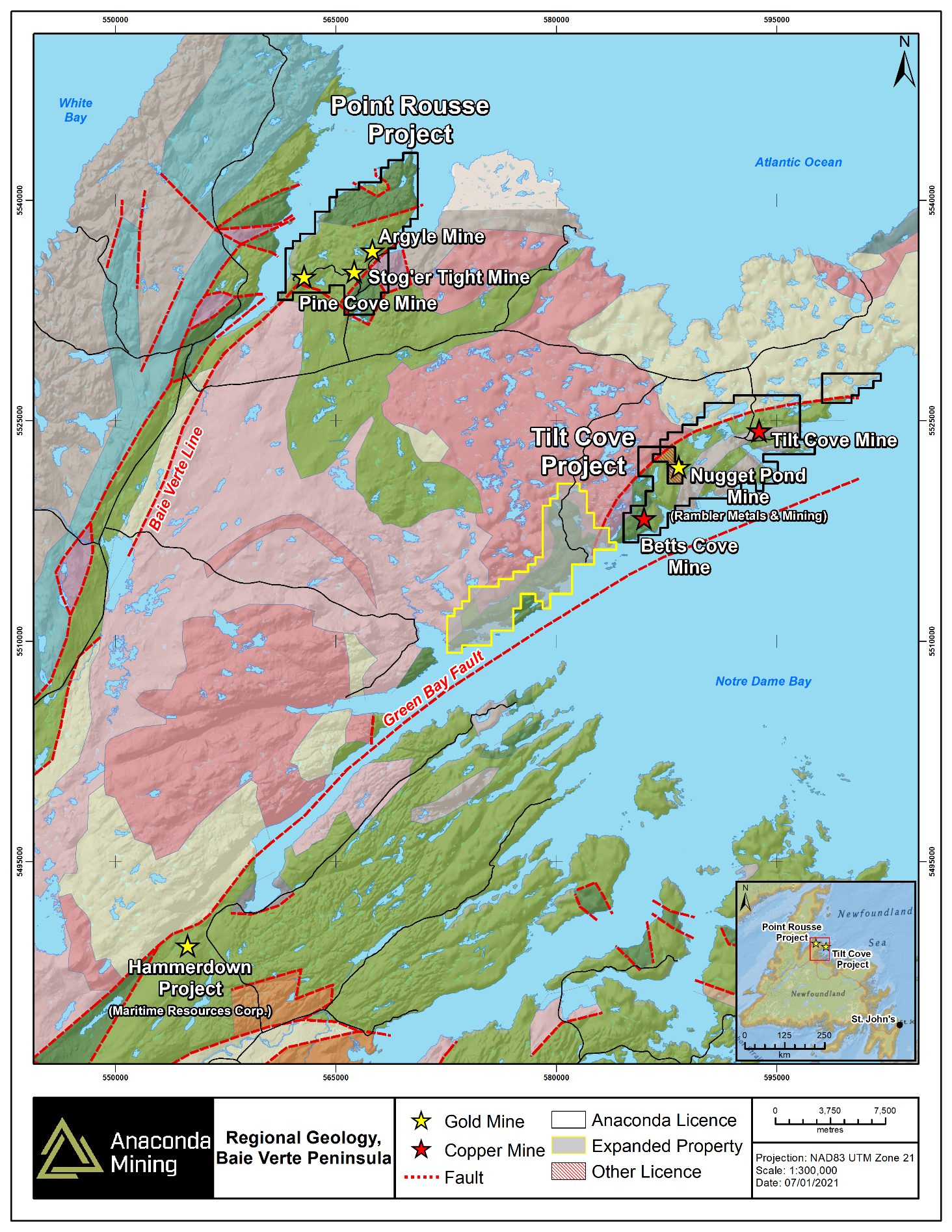 Exhibit A. A regional map showing the location of the Tilt Cove Project with the expanded project area highlighted including 35 km of strike. The location of important fault systems (Baie Verte Line and Green Bay Fault) and their proximity to orogenic gold deposits are shown. 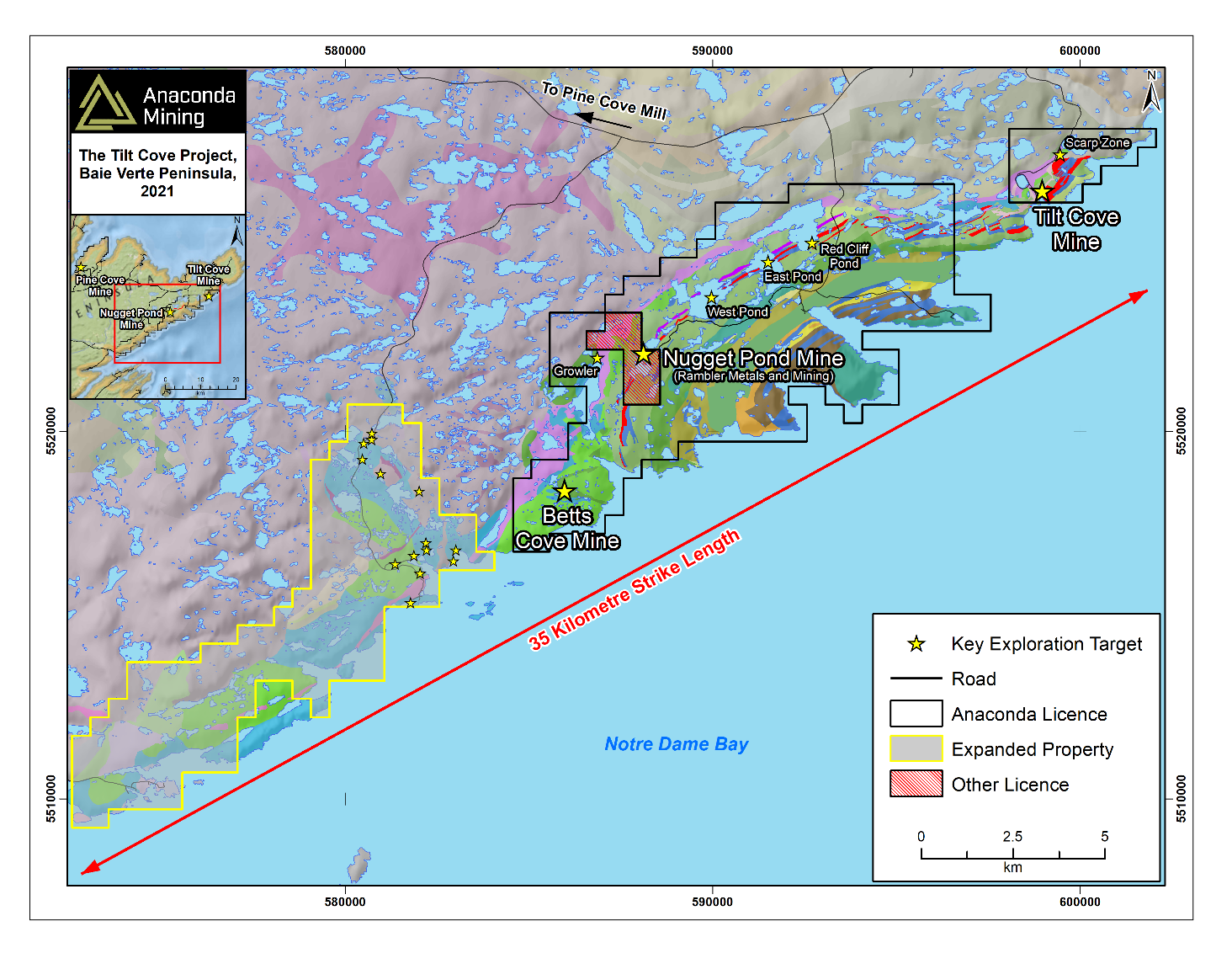 Exhibit B. A map showing the expanded footprint of the Tilt Cove Project, including significant showings and sample locations, highlighted in this press release.