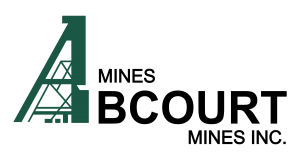 Abcourt Mines Inc. (TSX-V: ABI, Berlin: AML-BE and Frankfurt Stock Exchanges: AMLFF) (“Abcourt” or the “Company is announcing positive results for the feasibility study update on the Abcourt-Barvue project and a major reduction in the initial capital cost.

The Abcourt-Barvue property was in production by an open pit and an underground mine during two different periods. The project consists of three open pits, namely Barvue, Abcourt East and Abcourt West, and the development of an underground mine to produce a zinc-silver
concentrate.

The Abcourt-Barvue Project is located in the Abitibi area, northwestern Quebec, Canada, 60 km
north of the town of Val d’Or. The project is located on an existing mine site with several readily
useable infrastructures, in a very easily accessible area where all services may be obtained at
competitive prices.

MINERAL RESOURCES
A mineral resource estimate was produced by Jean-Pierre Bérubé in 2014 titled NI 43-
101 Mineral Resources Report for the Abcourt-Barvue Property. The estimate returned
measured and indicated resources (M&I) for the Abcourt-Barvue deposit totalling 8,086,000
tonnes grading 3.06% Zn and 55.38 g/t. These resources were used as a basis for the
current update of the 2007 feasibility study.

Here is a comparative table of resources in all categories:

MINERAL RESERVE ESTIMATE
The 2018 mineral reserve estimate including dilution is presented in the following table in
comparison with the 2007 estimate.

MINING PLAN
A mine plan was developed for the 2018 mineral reserves using the Genivar (now WSP
Canada) 2007 pit design and underground mine design. The 2014 mineral resource diluted
and recovered produced a total of 8,074,162 tonnes of mill feed grading 2.83% Zn and 51.79
gpt Ag, of which 6,589,361 tonnes (81.6%) will be produced in open pit operations and
1,484,801 tonnes (18.4%) will be produced in underground operations. The life of mine is 13
years. There are good possibilities of increasing the life of mine by converting inferred
resources into proven and probable reserves and by finding new reserves with additional
exploration.
The open pit operation consists in the expansion and deepening of the Barvue pit and the
excavation of the Abcourt East and the Abcourt West pits over a period of 13 years. The pits
will be excavated to a depth of 166 m, 72 m, and 42 m respectively. The underground
operations consist in the mining of stopes from a depth varying from 150 m to 200 m below
surface to the pit bottoms using the Avoca method. The underground work areas will be
accessed by excavating declines.

MINERAL PROCESSING
Historical mineral recoveries during the Barvue production period were over 90% for zinc
and 77% for silver. In 2017, metallurgical tests were performed in several laboratories. The
cyclic flotation tests realized on the ore of Abcourt-Barvue have shown the possibility to
recover 97.5% of the zinc and 77.8% of the silver in a Zn-Ag concentrate assaying
53.4% Zn and 740.6 g/tm Ag.
The processing plant remains at a mill capacity of 650,000 tonnes per year but the circuit
was modified by eliminating the cyanidation circuits to produce only a zinc-silver
concentrate. Minor changes were brought to the surface infrastructure such as the
installation of new 25kV power line on the site and the relocation of the waste rock
stockpiles.
An average of 32,000 tonnes of zinc-silver concentrate grading 52.7% Zn and 768 gpt Ag
will be produced annually.

STRATEGY AND OUTLOOK
Currently, the Company is focussing on stabilizing and increasing the Elder production.
Our objective is to produce 12,500 tonnes per month of gold mineralization.
We wish to use the full capacity of the Sleeping Giant mill by treating custom ore, to
reduce the operating cost per tonne treated.
For the long-term growth in the gold sector, the Company has started a drilling program
on the Discovery and Flordin gold properties where substantial gold mineralization is
found.
For the long-term in the zinc sector, various plans are being considered.

ABOUT ABCOURT MINES INC.
Abcourt Mines Inc. is a gold producer and a Canadian exploration company with strategically
located properties in northwestern Quebec, Canada. The Elder property has gold resources
(2018) and a positive P.E.A. study (2012). Abcourt is focusing on the exploitation of the
Elder mine.

The Abcourt-Barvue property has silver–zinc reserves (2019). A feasibility study was
completed in 2007 by Roche / Genivar. An update was completed in January 2019.
In 2016, Abcourt acquired the Sleeping Giant mine and mill, located half-way between Amos
and Matagami, in Abitibi, Quebec, in the territory covered by the Plan Nord of the Quebec
government. The mill has a capacity of 700 to 750 tonnes per day. A NI 43-101 resource
estimate was recently filed. Some custom milling is now being done.
To know more about Abcourt Mines Inc. (TSXV: ABI), please visit our web site at
www.abcourt.com and consult our filings under Abcourt’s profile on www.sedar.com.
This press release was prepared by Mr. Renaud Hinse, Engineer and President of Abcourt
Mines Inc. Mr. Hinse is a “Qualified Persons” under the terms of Regulation 43-101. Mr.
Hinse has approved the scientific and technical disclosure.

FORWARD LOOKING STATEMENTS
This news release contains forward-looking statements that include risks and uncertainties.
When used in this news release, the words “estimate”, “project”, “anticipate”, “expect”,
“intend”, “believe”, “hope”, “may” and similar expressions, as well as “will”, “shall” and other
indications of future tense, are intended to identify forward-looking statements. The forwardlooking statements are based on current expectations and apply only as of the date on which
they are made. Except as may be required by law, the Corporation undertakes no obligation
and disclaims any responsibility to publicly update or revise any forward-looking statements
or information, whether as a result of new information, future events or otherwise.
The factors that could cause actual results to differ materially from those indicated in such
forward-looking statements include changes in the prevailing price of gold, the CanadianUnited States exchange rate, grade of ore mined and unforeseen difficulties in mining operations that could affect revenue and production costs. Other factors such as
uncertainties regarding government regulations could also affect the results. Other risks may
be set out in Abcourt’ annual and periodic reports. The forward-looking information contained
herein is made as of the date of this news release.