NB: THIS PAGE IS STILL “UNDER CONSTRUCTION” AND I’M NOT FINISHED YET WITH THE CONTENT WHO IS SUPPOSED TO BE HERE.

Toronto, ON – January 16, 2020 – Anaconda Mining Inc. (“Anaconda” or the “Company”) (ANX: TSX) (OTCQX: ANXGF) is pleased to announce the results of an underground bulk sample program (the “Bulk Sample”) undertaken at its 100%-owned Goldboro Gold Project (“Goldboro” or the “Project”) located in Nova Scotia, Canada. The objectives of the Bulk Sample were to confirm the geological interpretation of the deposit, test for spatial and grade continuity of the mineralized structures, validate key assumptions of the updated Mineral Resource model, and test certain types of mining methods.

Key Takeaways of the Bulk Sample

2 Mine grade was based on muck samples taken from every second truck during the mining process, estimated using metallic screening with an 80 g/t gold top cut.

3 Contained ounces and head grade calculated based on gold produced from the Pine Cove Mill plus gold contained in tailings.

“Anaconda is pleased to announce the results of the Goldboro Bulk Sample, a key milestone in the advancement towards a construction decision. We are very encouraged with the excellent results of test mining where the average diluted mine grades reconciled well with the estimated undiluted block model grades, providing further confidence in the updated Mineral Resource. The underground component portion of the Measured and Indicated Mineral Resource grade for the entire Goldboro Deposit is 6.18 g/t gold at a 2.0 g/t gold cut-off grade. The positive Bulk Sample results demonstrate a slightly positive reconciliation to the mined grade, within acceptable limits, thereby giving further confidence in the Mineral Resource being used as the basis for the Feasibility Study, which is expected to be announced in Q1 2020. Furthermore, the processing of the bulk sample material demonstrated excellent gravity recovery of 51%, which confirms the gravity test work undertaken as part of the overall metallurgical test program.”

The Bulk Sample was extracted from the Boston-Richardson Gold System within the Goldboro Deposit, leveraging existing decline and cross cuts developed in the late 1980’s to minimize the development needed to access mineralized zones. The average underground NI 43-101 compliant Measured and Indicated Mineral Resource grade for the entire Goldboro Deposit is 6.18 g/t gold at a 2.0 g/t gold cut-off. The Mineral Resource for the specific mine areas targeted for the Bulk Sample predicted 11,274 tonnes of Mineral Resource at an average undiluted grade of 3.81 g/t gold, capped at 80 g/t. A total of 13,022 tonnes of mineralized material was mined and stockpiled on surface, at an average diluted grade of 3.21 g/t gold based on grade control samples capped at 80 g/t gold, out of which 9,785 tonnes at an average diluted grade of 3.51 g/t gold were shipped to the Pine Cove Mill in Newfoundland for processing.

Five areas of development were completed on three levels (Exhibit A) at mine elevations of 4965 (Level 1), 4930 (Level 2 W, Level 2 E, Level 2 Ramp), and 4920 (Level 3 W and Level 3 E). New development, in excellent ground conditions, included three drifts off the existing cross cuts on Level 1 and Level 2 (Exhibit B) as well as the creation of a newly developed ramp to Level 3 (Exhibit C) with two additional drifts resulting in a total of 213 metres of new development. A total of 86 drift rounds were blasted which allowed for inspection, mapping, and sampling from the faces of the development headings. Information was also collected from the faces of 13 slot raise rounds during the development of the stopes. Drifting was advanced using a single boom jumbo, typically with one round blasted per 12-hour shift. Stoping was completed using a long-hole method using both up-holes and down-holes. Blasted rock was mucked using 1.5 and 2.0 cubic yard scoop trams, and then loaded into a 7.0 cubic yard truck to haul to surface.

Development faces were geologically mapped, photographed, and sampled. Chip and muck sampling was completed systematically to determine average grade for each round. A total of 2,148 muck and 1,380 chip samples were collected, as well as drilling and sampling of 518 test holes, and 132 long holes, in addition to quality control samples.

Anaconda shipped 9,785 tonnes of the mineralized material to the Pine Cove Mill in Newfoundland for processing, where the gold was extracted via a combination of gravity recovery followed by sulphide flotation and cyanide leaching. The mill recovered 610 ounces of gold from the gravity concentration circuit, with an additional 360 ounces being recovered through the flotation and leaching circuits, for a total of 970 ounces of gold recovered and an overall recovery of 81%. Concentrate from the gravity circuit was further cleaned through the use of a shaker table and additional gravity concentration processes to ultimately produce gold doré bars.

Composite samples taken from key sampling points in the process, including gold contained in tailings, were used in conjunction with the actual gold recovered and milled tonnage to calculate an average head grade of 3.81 g/t gold. The reconciled results from the processing of the Bulk Sample material are as follows:

All underground chip, muck, and sludge samples were shipped daily to the contract assay lab at the Dufferin Mine, near Sheet Harbour, Nova Scotia, where they were analyzed for gold by fire assay. A total of 836 samples (coarse reject material) assaying greater than 1.50 g/t gold were shipped to Eastern Analytical Limited (“Eastern”) in Springdale, NL for check analysis via metallic screen fire assay. Quality control samples were systematically inserted into each sample batch and consisted of two prepared powdered gold standards (Certified Reference Material) and a natural blank. Results were assessed for accuracy, precision, and contamination on an ongoing basis.

Mill feed tonnages used in the sample processing reconciliation were provided daily. The Company collected 6-hour composite samples during the processing of the Bulk Sample, which were assayed by Eastern. Daily composite samples were taken on feed and tail streams for reconciliation purposes. Mill throughput for the Bulk Sample was estimated based on the feed belt scale which is calibrated monthly. All samples were sent out to an external independent lab for preparation and assaying for both gold and arsenic. Gold assays were obtained by screened metallics fire assay. For all the other samples, gold assay was obtained by fire assay AA finish or gravimetric finish.

Bulk Sample Gold Sales and Update on Statement of Claim

Of the 970 ounces of gold produced, the Company has sold 903 ounces for gross proceeds of $1,773,000, which will be recorded as a credit against the Goldboro exploration and evaluation asset in the Company’s statement of financial position. The related processing costs at the Pine Cove Mill will also be capitalized to the Goldboro asset on a proportionate basis. The remaining ounces will be sold in 2020.

As reported on July 23, 2019, the initial shipping company that Anaconda had engaged for the Bulk Sample, NIL Group Limited (“NIL”), has filed a Statement of Claim (the “Claim”), alleging that the Company is responsible for certain additional costs in relation to the shipment. As a result, NIL had served a warrant with respect to the approximately 1,000 tonnes which were yet to be discharged from the barge at the time of filing of the Claim. As disclosed as part of Anaconda’s Q3 2019 financial reporting, the Company obtained a court order allowing it to process the tonnes subject to the warrant, on condition that it post the proportional gross revenue generated from said tonnes into an escrow account with the Court, pending further legal proceedings.

The Company continues to consider the Claim to be without merit and on August 16, 2019, the Company filed its Statement of Defense and Counterclaim against NIL, Newman Investments Limited, a related company to NIL, as well as NIL’s principals, alleging, among other things, contractual breach, negligent and/or fraudulent misrepresentation, and fraudulent deceit. Statements of Defense to the Company’s counterclaim have not yet been filed.

The scientific and technical content of this news release has been prepared, reviewed and approved by Mrs. Gordana Slepcev, MSc., P.Eng., Chief Operating Officer of Anaconda, who is a “Qualified Person” as defined by National Instrument 43-101 – Standards of Disclosure for Mineral Projects. The Bulk Sample results and reconciliation, including the contents of this press release, were also reviewed and approved by Robert Raponi, P. Eng. of Ausenco Engineering Canada Inc.

This news release contains “forward-looking information” within the meaning of applicable Canadian and United States securities legislation. Generally, forward-looking information can be identified by the use of forward-looking terminology such as “plans”, “expects”, or “does not expect”, “is expected”, “budget”, “scheduled”, “estimates”, “forecasts”, “intends”, “anticipates”, or “does not anticipate”, or “believes” or variations of such words and phrases or state that certain actions, events or results “may”, “could”, “would”, “might”, or “will be taken”, “occur”, or “be achieved”. Forward-looking information is based on the opinions and estimates of management at the date the information is made, and is based on a number of assumptions and is subject to known and unknown risks, uncertainties and other factors that may cause the actual results, level of activity, performance or achievements of Anaconda to be materially different from those expressed or implied by such forward-looking information, including but not limited to risks associated with the exploration, development and mining such as economic factors as they effect exploration, future commodity prices, changes in foreign exchange and interest rates, actual results of current production, development and exploration activities, government regulation, political or economic developments, environmental risks, permitting timelines, capital expenditures, operating or technical difficulties in connection with development activities, employee relations, the speculative nature of gold exploration and development, including the risks of diminishing quantities of grades of resources, contests over title to properties, and changes in project parameters as plans continue to be refined as well as those risk factors discussed in Anaconda’s annual information form for the year ended December 31, 2018, available on www.sedar.com. Although Anaconda has attempted to identify important factors that could cause actual results to differ materially from those contained in forward-looking information, there may be other factors that cause results not to be as anticipated, estimated or intended. There can be no assurance that such information will prove to be accurate, as actual results and future events could differ materially from those anticipated in such information. Accordingly, readers should not place undue reliance on forward-looking information. Anaconda does not undertake to update any forward-looking information, except in accordance with applicable securities laws. 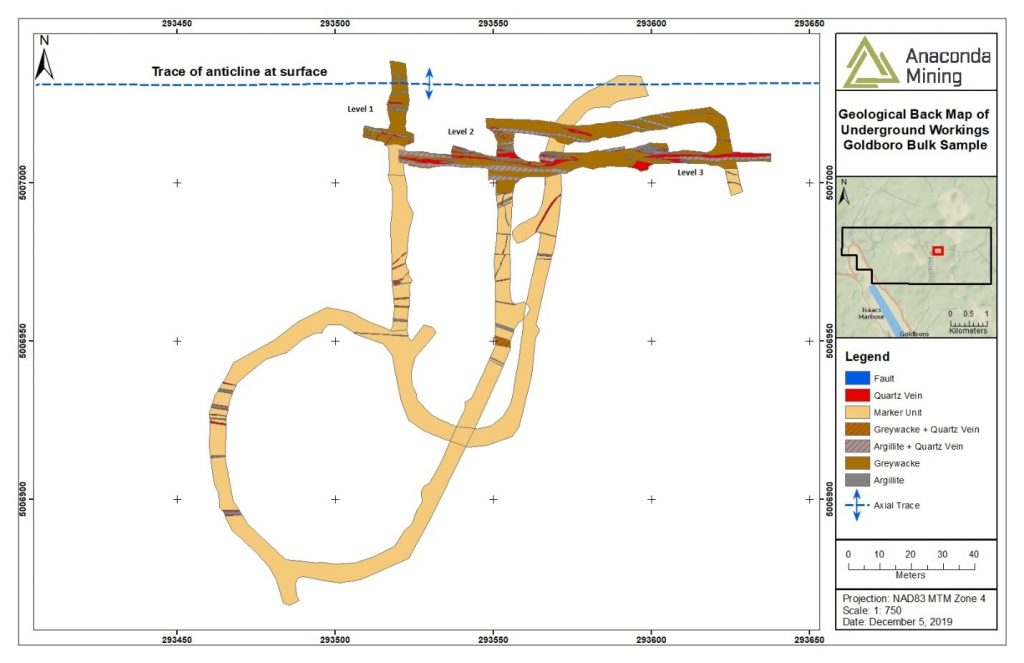 Exhibit B: Level 2 West Round 8. North and South zone of Belt 1 of the Boston Richardson Gold System looking West. 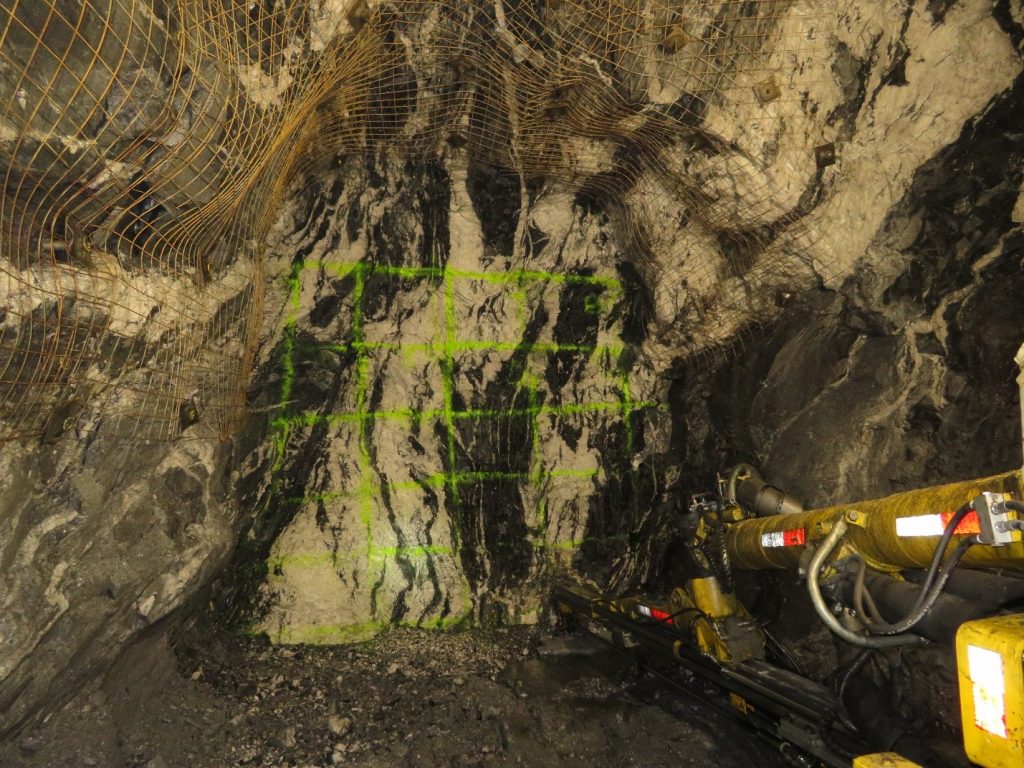 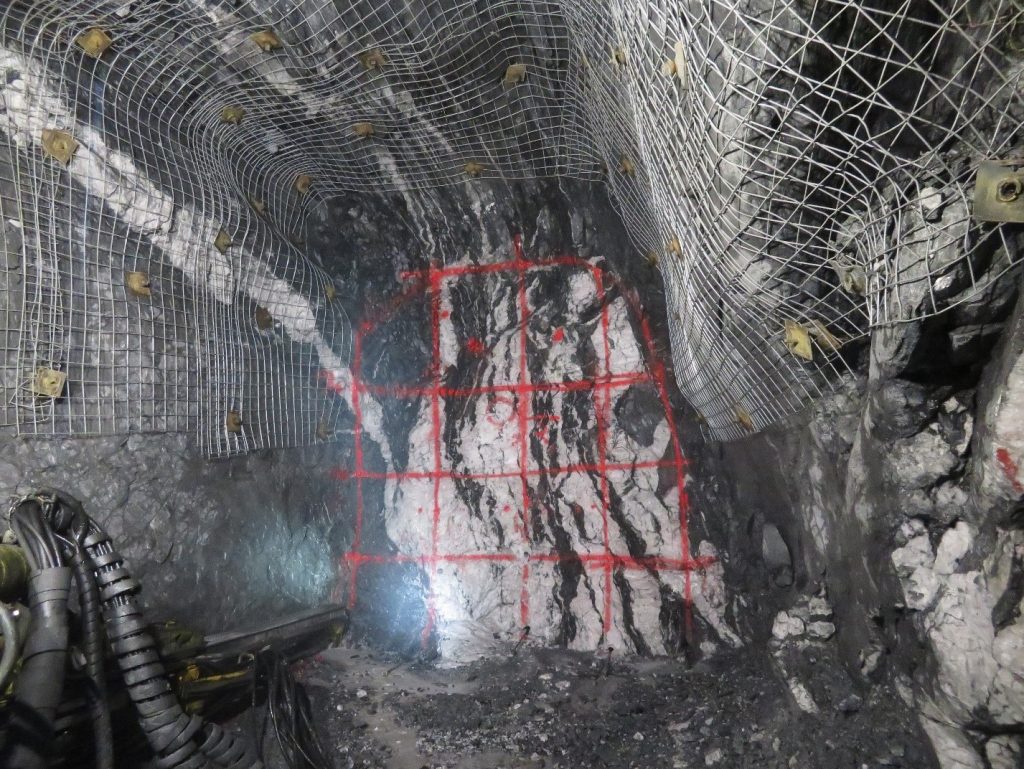